India’s Taj Mahal is both one of the country’s finest Muslim-era architectural structures and a representation of the epitome of love, with the millions of people who visit each year witnessing first-hand the physical representation of Shah Jahan’s devotion to his deceased wife.

For Anand Prakash Chouksey, the ivory-white mausoleum was a great inspiration in life and after many years of research, the 52-year-old education entrepreneur decided to build a replica in his hometown in central Madhya state. Pradesh.

Photo taken on February 28, 2022 shows the Taj Mahal-style house of Indian entrepreneur Anand Prakash Chouksey, located in Burhanpur in the central state of Madhya Pradesh. It is one third the size of the original Taj Mahal. (Kyodo)

“I have visited the Taj Mahal more than three times. I love this building because it is a symbol of love and today it is an aspect that the world misses,” Chouksey said.

Nestled in the small town of Burhanpur, the replica is home to Chouksey, his wife and their two children.

“The last time he visited the Taj Mahal was with a measuring tape,” said Kabir, 24-year-old son of Anand Prakash.

“Everyone laughed at him when he did that,” as he jotted down almost every step he took of the monument with the tape, his wife Manjusha, 48, added. 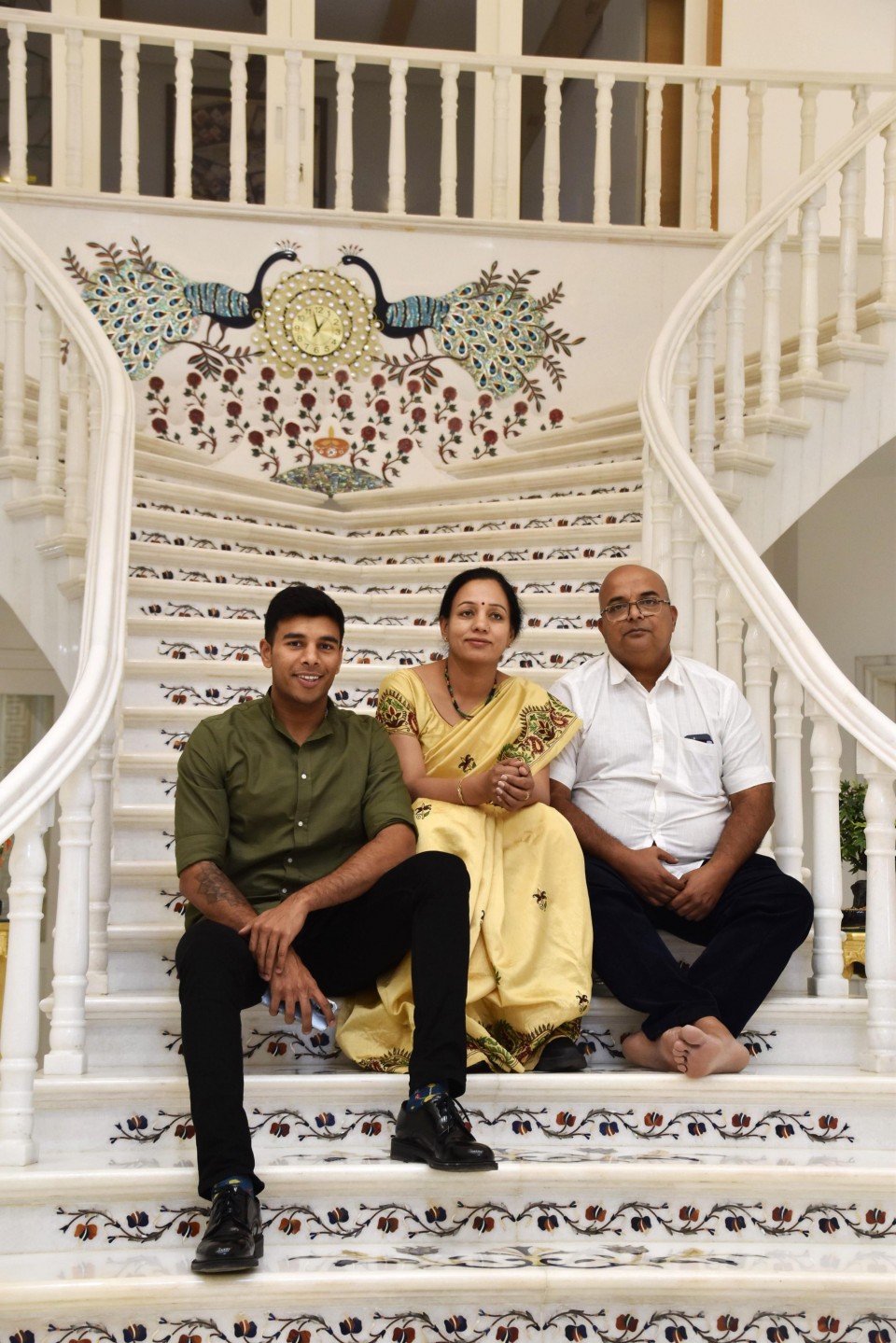 Anand Prakash Chouksey (right) with his wife Manjusha (centre) and son Kabir are pictured in Burhanpur in the central Indian state of Madhya Pradeshon in February 2022. (Kyodo)

Construction began in 2017 and in 2019 the family moved in as the project continued around them. It cost around 30 million rupees ($394,000) and three years to complete the replica, which is one-third the size of the original structure.

The complex design of the house made the project difficult. But “because we wanted the exact replica, we tried matching combinations,” said the architect, Praveen Chouksey, a family friend.

The hardest part was building the 9-meter-wide domed roof, the architect said, adding that he hired a special team to research and perfect the section. About 70 to 80 workers were regularly involved. 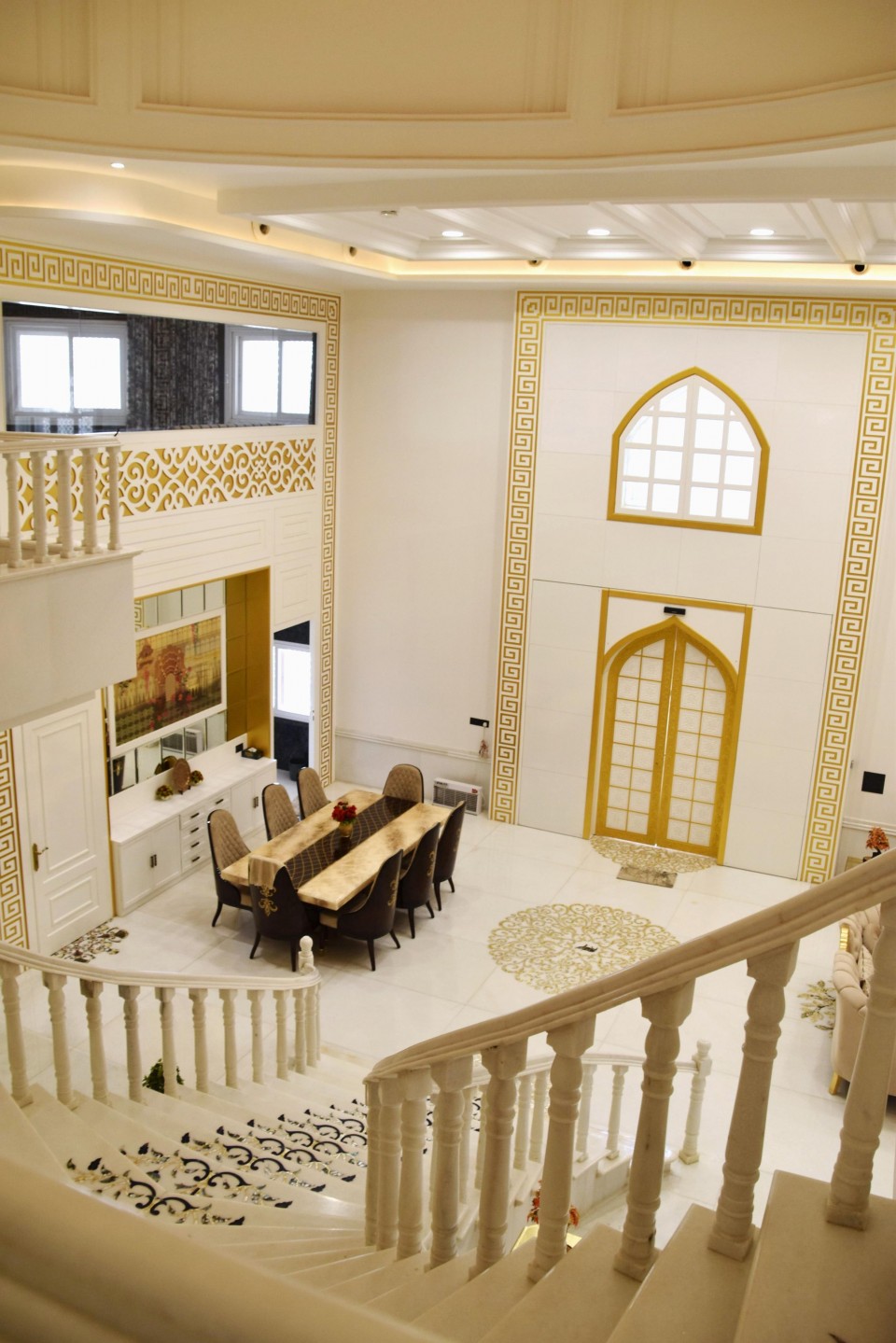 The photo taken in February 2022 shows intricate patterns on a marble floor in the dining room and staircase of the replica Taj Mahal house of Indian entrepreneur Anand Prakash Chouksey, located in Burhanpur in the central state of Madhya Pradesh. (Kyodo)

Besides hoping to convey messages of love and harmony, Anand Prakash also dedicated the building to his wife, who supported him during the early years when they struggled financially after their marriage in 1992.

Anand Prakash’s family worked in poverty. His father owned three buffaloes, so he made his living delivering milk to homes in Burhanpur by bicycle. It was in 1994.

The couple had a love marriage, opposing Manjusha’s parents, who did not support their union in its early stages.

Having a deep interest in academia, Anand Prakash started tutoring some children for college entrance exams. After experiencing some success, the couple opened a private school for students wishing to pursue careers in engineering and medical sciences.

Built on a large property in Burhanpur which the couple bought in 2001, the school has embraced advanced learning tools that use information technology.

As some of its students went to prestigious Indian institutes of technology and major American universities, the school began to attract foreign students.

“We started with 7 rooms and now we have 700 rooms just inside the school premises. It grew gradually, it took us almost 20 years to reach this level,” said Kabir, the son of the couple.

The replica of the Taj Mahal family home is also on the school campus.

Burhanpur is an isolated town with no notable industry, about a five-hour drive from the airport in its nearest major city, Indore. However, it is known as the region where Mumtaz Mahal, wife of the 17th century ruler of the Mughal Empire, Shah Jahan, died.

Since the construction of the house, the Choukseys have welcomed hundreds of visitors who came to admire the architecture and photograph it. But visitors are not being accepted now due to the coronavirus pandemic.

A buffalo is carved into the ground at the entrance to remind them of when they were poor. “This buffalo represents our family roots from where we started our journey,” said Anand Prakash.

Sharing his motto “made in Burhanpur and made for Burhanpur”, Anand Prakash said his family will continue with their plans to distribute food to the underprivileged and work to help as many people as possible.