Franco-Lebanese architect Annabel Karim Kassar has reconstructed the facade of a traditional Beirut house at the V&A in London as part of an installation centered on the 2020 Beirut explosion.

Entitled The Lebanese House: Save a House, Save a City, the centerpiece of the installation is a reconstruction of the facade of Bayt K, a traditional house in the Gemmayzeh district of Beirut.

Karim Kassar’s AKK architecture studio was already working on the restoration of the 19th century Bayt K when it was badly damaged in a warehouse explosion in Beirut that devastated a significant part of the city in August 2020 .

His V&A reconstruction of the house is a five-meter-tall stone structure with built-in triple arched arched windows, which are supported by wooden beams that both echo the construction of a real house and act as a metaphor for reconstruction, according to Karim Kassar.

“[The work] is not an interior decoration of a model – it really is a piece of architecture,” she told Dezeen. “As an architect, that’s part of what I love to do because I’m always building things.

The facade was transported from Lebanon to the UK in pieces, after which it was erected into a life-size reconstruction at the V&A Museum by artisans in Beirut.

Visitors are invited to enter and touch the facade, which has tiles salvaged from Bayt K underfoot to create a floor, while the reconstructed ceiling features a digitally printed replica of the real tiles that were damaged in the blast .

A handful of improvised A3 images of iPhone street photography taken from or near Bayt K by Karim Kassar are pasted on a gray painted wall that lines the back of the structure.

The marble columns which support the windows were finished in the UK, rather than being transported as whole items which risked breaking in transit.

The reconstructed facade is supported by wooden beams. Karim Kassar explained: “It’s not just for support – [wood] is normally used to support a façade like this, but it was also designed to juxtapose traditional and modern structures.”

“Wood is a beautiful way to support and structure,” she added. “In the main work of the [original] house, we used a lot of pieces along the beams and for support.” 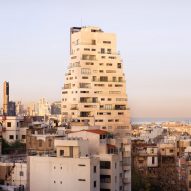 In addition to the facade, the installation includes a large sofa with a mattress and fabric cushions from Beirut on which visitors can lie down.

The seats are a reinterpretation of a liwan, the term for a space that often includes a similar seating lounge in a traditional Lebanese home.

A crate containing fragments of Bayt K’s painted plaster ceiling that was destroyed in the explosion is also in the installation space.

In addition to these elements, the architect has integrated into the project three films that play along the facade on a screen placed in front of amphitheater seats with traditional cushions.

The films are directed by Wissam Charaf and Florence Strauss and document the story of Bayt K as well as the impact of the explosion on the people of Beirut. Visitors can also explore a digital platform that offers more information about the architecture of the original house.

“It’s very moving”, explained Karim Kassar while installing his work. “I realized how many emotions I brought that I was [previously] holding myself back from not feeling. Now I realize it’s a way to heal.”

Karim Kassar founded AKK in 1994. The architect’s previous similar projects include a pair of telescopic steel and wood pavilions that were built during a past edition of Milan Design Week, which also aimed to recreate a liwan in a Milanese courtyard.

The photography is by Ed Reeve.