After Ultrace ended, we used the grounds around Wrocław Stadium for an impromptu photo op with one of the event’s most striking cars and the original Jägermeister Racing Group-5 that inspired it. Colin Ware, director of Kustom Kolors, interviews Błażej Żuławski. 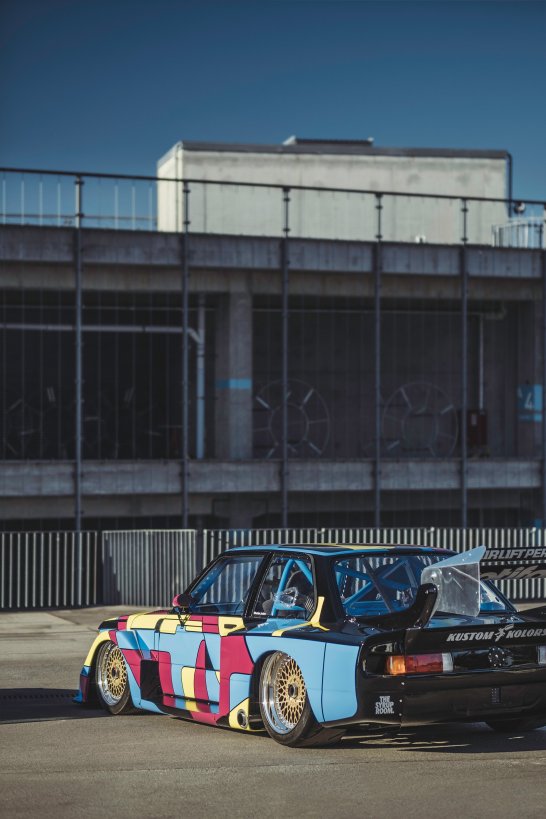 “It really is my wife’s car, we are both in love with the BMW brand. Besides having two M3s and a few other models, Lucy and I have four e21s in total. She won many international competitions with one of them, also “on bags” (ie lowered on air suspension), but quite stock compared to the one you see here. About four years ago, however, we were driving back from Wörthersee and stopped at BMW Welt, where a Jägermeister Racing Group-5 e21 was on display and I thought, OK, let’s build this next. 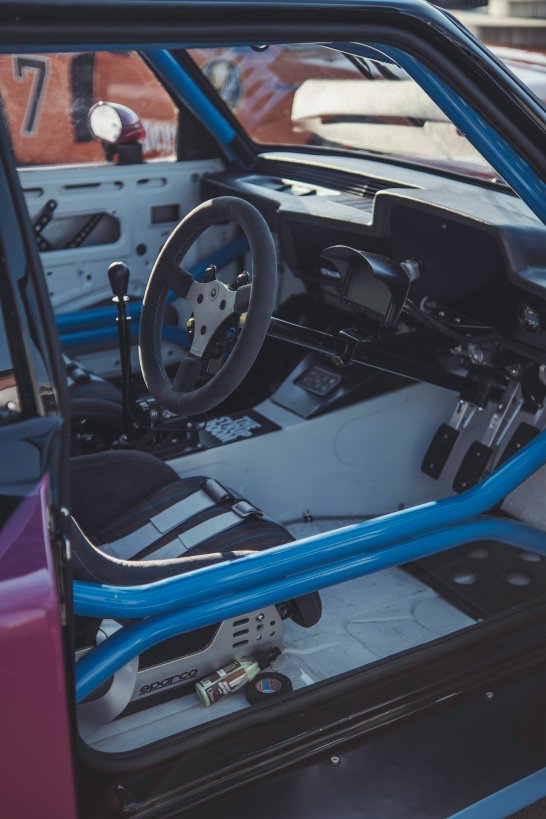 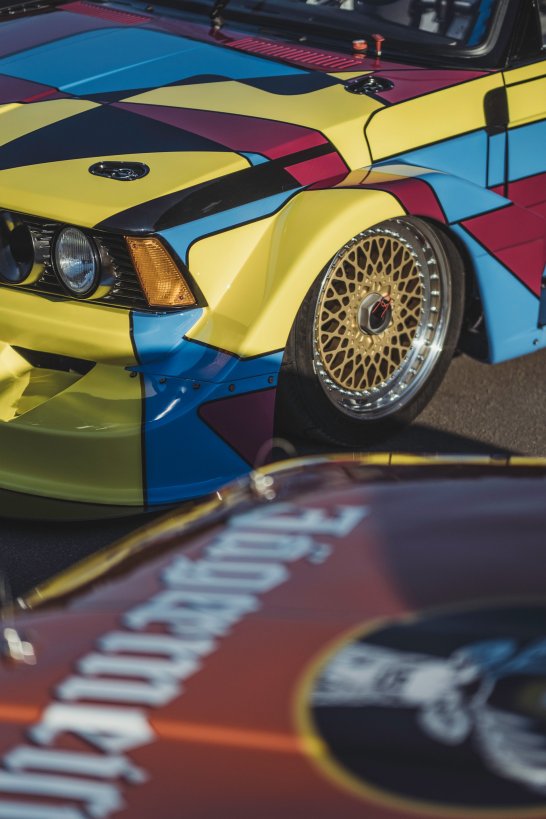 Is it really an e21 under all those striking panels, like the original next to it?

“Yes and no. First of all the car needed an engine. The original Formula 2 derived unit is absolutely impossible to find and an exact replica would cost a fortune to build, so we opted for the best next thing A big V8 That meant finding a suitable donor car, in the form of a BMW 5 Series e39 with the 4.4 M62 under the bonnet The body kit panels had to be made especially for us and we literally got them from a guy in the middle of Germany, who did an amazing job on them. They just wouldn’t fit in the 5 Series chassis no matter how hard we tried.” 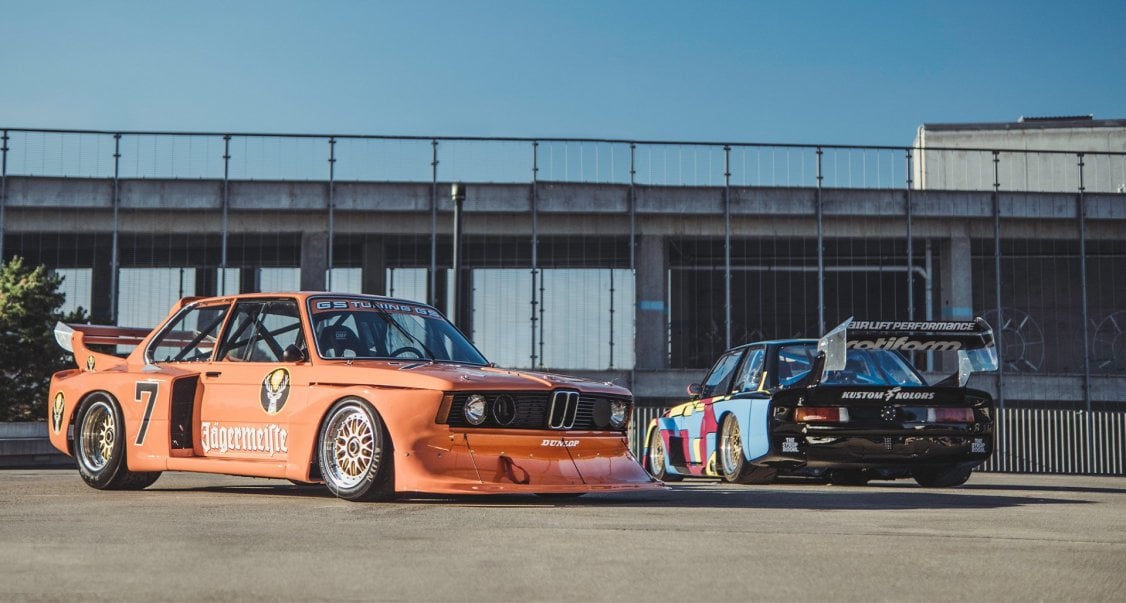 I’m sure there was a creative solution to the problem…

“We were guys building a car in a shed, which in itself is a great British tradition, so of course there was. We decided to build the chassis ourselves, and my friend Chris Wyatt, who is a nautical engineer, did an amazing custom job, we then married the chassis to the e39 subframes, over which we superimposed body parts from an e21 320 donor car, then installed a roll cage fitted to the body kit, and another aircraft engineer friend, Neil Ford, designed a custom wiring harness to make it all work, because that engine won’t run unless it recognizes the stock ECU’s ABS module for example.” 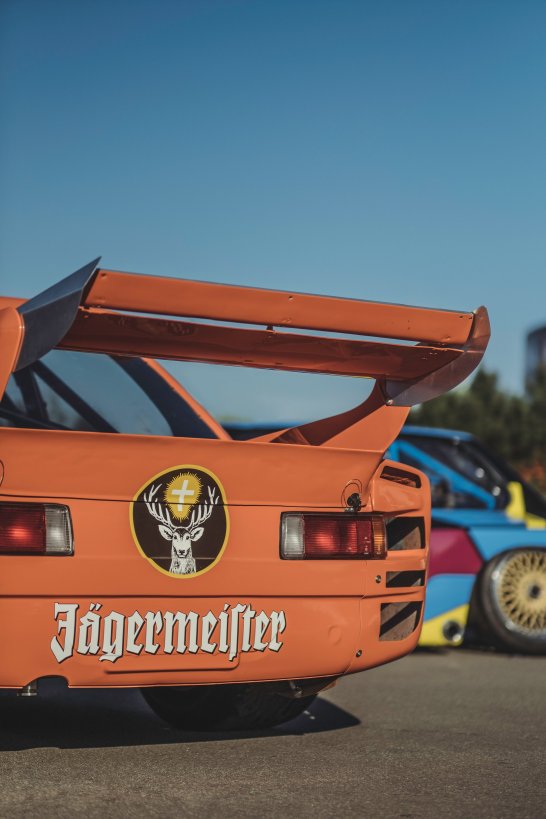 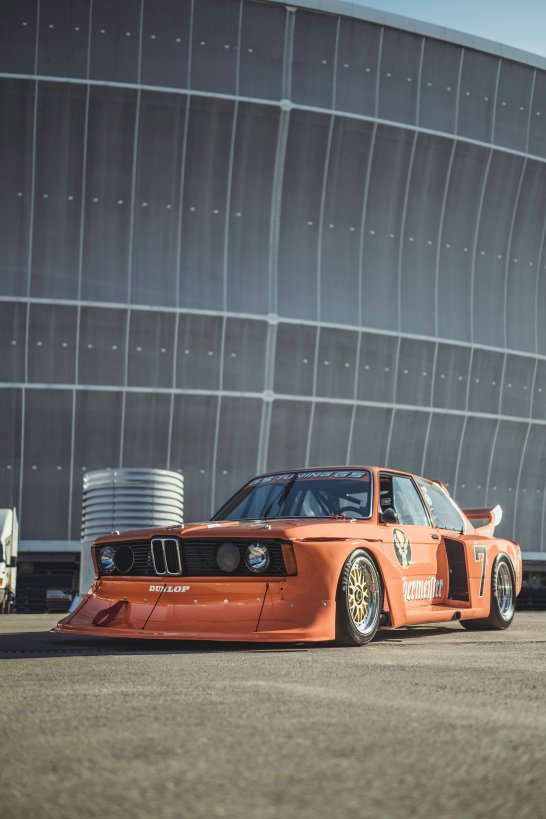 How long did this build take?

“About two years. Which is pretty quick because it kept us busy during the pandemic shutdowns. But we only worked on the car on Wednesday nights and weekends. Looking at it, a lot of people think the car was built by a big company, and although Kustom Kolors has been a car restorer and body repair shop since 2006, we’re really just a few friends having fun with weird builds.” 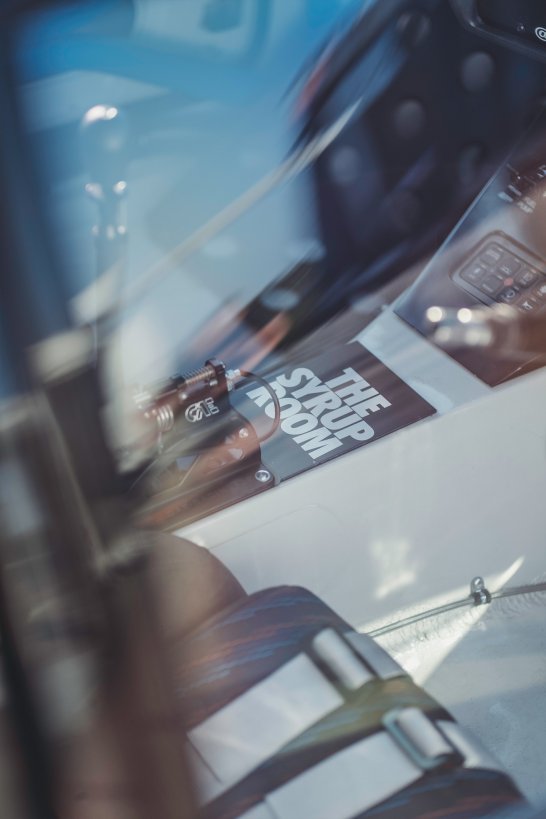 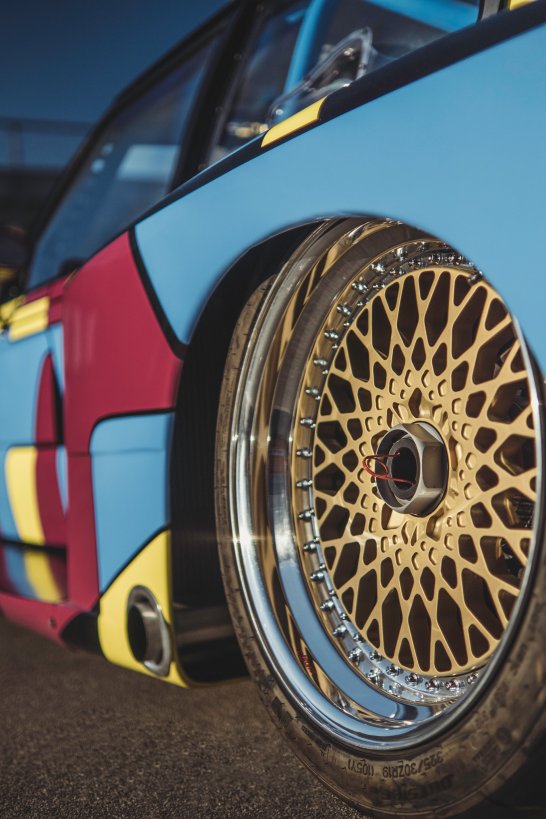 Tell me about the livery.

“It’s the brainchild of Josh and Jamie, two graphic designers whose company ‘The Syrup Room’ specializes in design-based physical projects. We call this car our ‘art car’ because we decided not to replicate any known livery, like the Jagermeister or Coors one, then let every Tom, Dick and Harry tell us what’s wrong with our car, and how unoriginal it is. So it’s an abstract design and asymmetrical, inspired by the boating world.The car started out black, but all the colors you see are painted and I did it myself, by hand.

“It has Airlift Performance air suspension and replica Rotiform seventeen and nineteen-inch wheels, which feature a central locking mechanism, but huge compared to the race car’s smaller wheels. It also has a hydraulic handbrake, just because it looks good. So, let’s say it’s racing inspired, but what it’s meant to be, above all, is fun.” 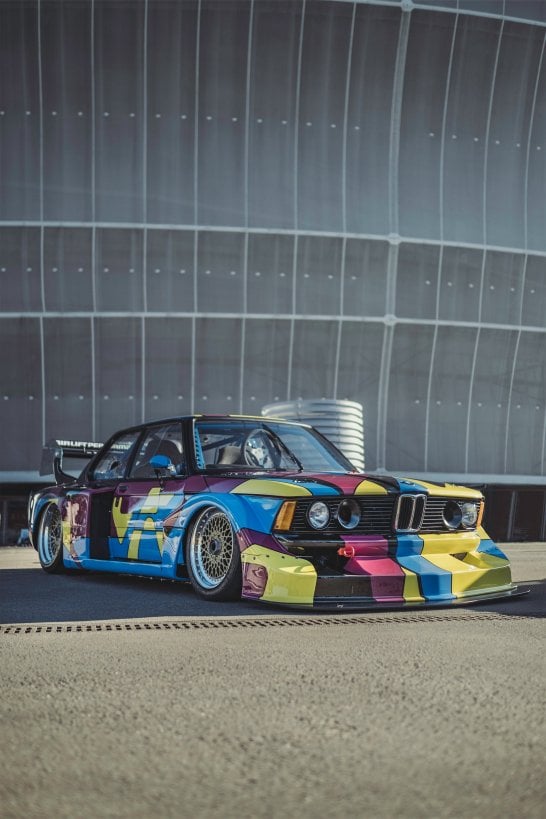 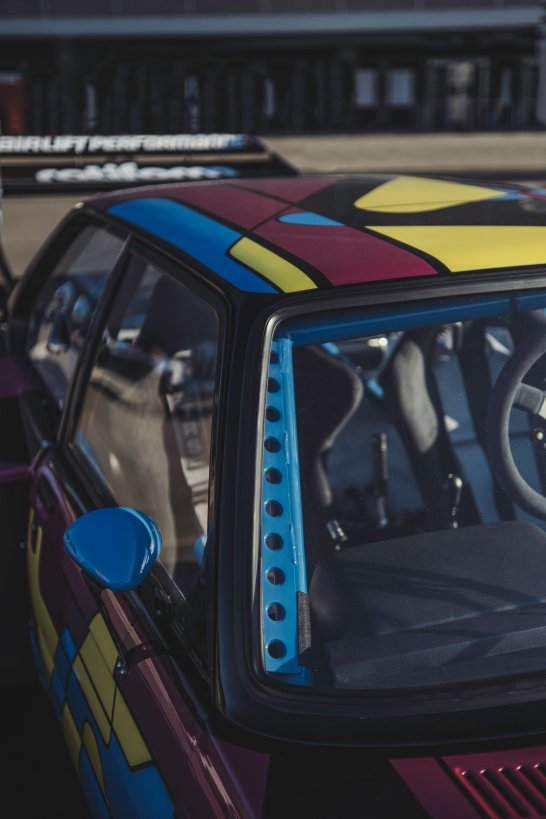 Is it just a show car or do you plan to drive it?

“Absolutely! My wife and I plan to use it most days, although the cops might not like how huge the rear fender is… but yes. There are turn signals you can activate on the racing-inspired steering wheel, which is a clip, but all buttons work wirelessly The 5-series six-speed manual gearbox (albeit with a short shifter) is still in the car, this The bespoke side exhaust can be free-flowing, but the exhaust gases can also be redirected to pass through mufflers which make the engine sound slightly quieter. 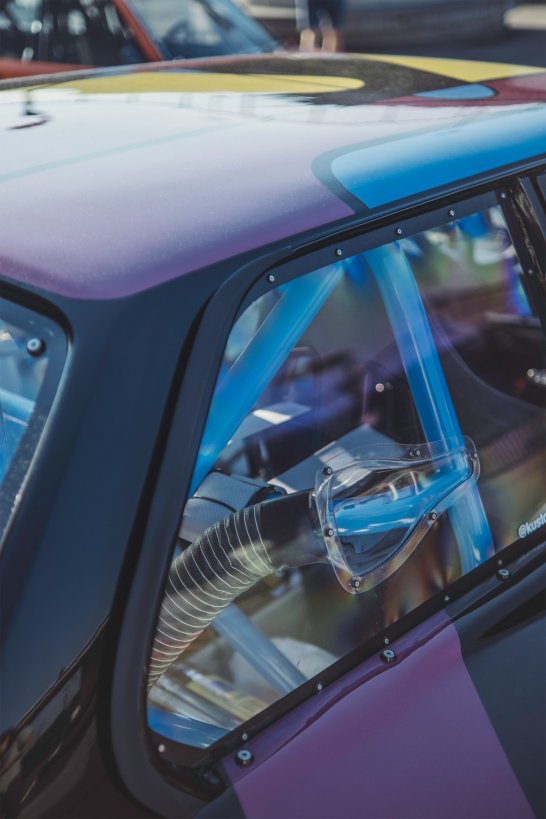 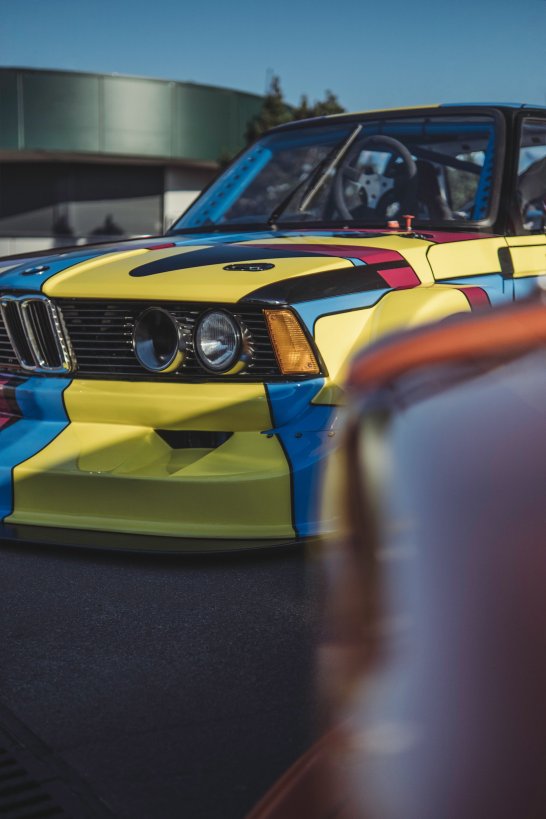 I have to commend you on the level of attention to detail, not only the Rotiform wheels, the BBS replicas or the body kit itself, but also other smaller things like the shape of the steering wheel or the way the seats are padded.

“Glad you noticed. We’ve gone with “M” fabric for the upholstery portion of the seats, and as you can see the harnesses match the interior color. The roll cage is painted the exact same blue than some of the exterior, and this color is also extended to some of the bits underneath which you can’t see, as it goes through the bulkhead at the front of the car, to form the suspension towers etc. There has real intercoolers in the side vents, direct airflow NACA ducts, and I even wanted the air suspension components to be visible and beautiful.” 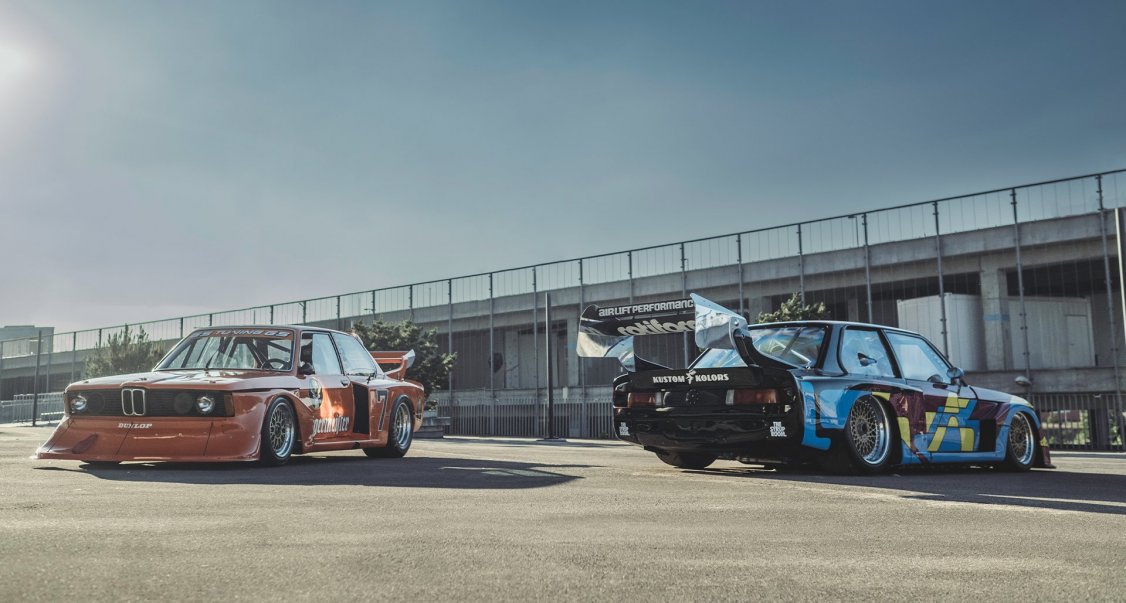 I guess all I can say is thank you for following good coach building traditions!

“Thank you for your interest in our modest construction.”