Riyadh used its first World Defense Show to highlight its goal of localizing at least half of its military spending before the end of this decade, with domestic growth and international partnerships among its investment and trade goals.

Poor visibility caused by dust storms and high winds led to the cancellation of an opening ceremony and flypast for the March 6-9 event at the custom-built venue about 70km away north of the Saudi capital. While this also limited the number of aircraft participating in the tri-service exposition static display, show organizers reported 65,000 visits from attendees and companies representing 85 countries.

Ahmad Al-Ohali, governor of Saudi Arabia’s General Authority for Military Industries (GAMI) – which created the show – notes that the kingdom’s Vision 2030 process has set clear goals to build the country’s capabilities and reduce the import dependence.

“His Royal Highness Prince Mohammed bin Salman [has] made it clear that there is no arms deal without local content,” he notes.

R&D investment currently accounts for only about 1% of the country’s annual defense procurement budget: well below a global average of over 4%, reaching over 8% in China and the United States. United.

“Our aspiration for R&D is to quadruple our investment by 2030,” Al-Ohali said at the International Institute for Strategic Studies’ Riyadh Defense Forum event in the Saudi capital on Tuesday. March 5.

“Our strategy has identified several areas for new technologies,” he adds, while describing R&D as “one of the essential pillars for Saudi Arabia to develop its defense industry.”

“There has never been a better time to invest in the defense sector in Saudi Arabia than now,” says Al-Ohali. “As part of our supply chain initiatives, we have already identified more than 70 investment opportunities, worth tens of billions of dollars.” 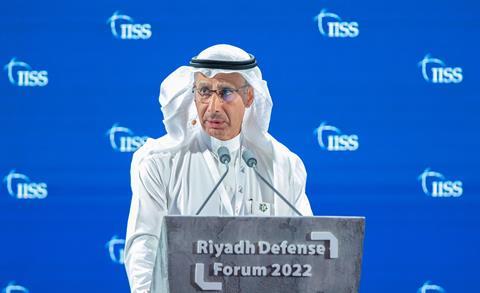 Following a significant policy change, he notes: “Foreign companies can now own 100% of their investments in the Saudi defense sector, with similar incentives offered to local investors. Over the next decade, we expect global investment [worth] north of $10 billion. This is an unprecedented time for strategic partnerships and investments.

“We have a very strong intellectual property program in place which will ensure technology transfer is well protected in the kingdom,” he adds.

“The past few years have shown that cooperation around the world is vital and needed more than ever in the face of adversity,” he said. “Countries around the world are developing industrial policies to create strong and resilient supply chains, and the Middle East is no different.”

Al-Ohali notes that Saudi Arabia’s annual GDP of around $850 billion ranks it among the top 20 nations in the world, and that having almost 50% of its population under the age of 30 ” means dynamism, potential and innovation”. Such factors make the nation “a powerhouse of investment representing stability and prosperity,” he said.

“We empower our nation by providing equal opportunities for all,” he says. “Women’s participation in the labor market in Saudi Arabia has steadily increased over the past few years and had reached 32% by the end of 2021: double what it was five years ago.”

A significant number of major Western defense companies – such as BAE Systems, Boeing and Lockheed Martin – have a decades-long industrial and operational presence in Saudi Arabia and have already begun a process of developing a local workforce.

All were present at the show, but maintained a low-key presence, rather than publicly discussing potential business opportunities. BAE first showed its full-scale replica of Britain’s future Tempest combat air system at a major international trade show, and Boeing promoted its F-15EX in model form, but Lockheed’s exhibit notably did not include an F-35 model. 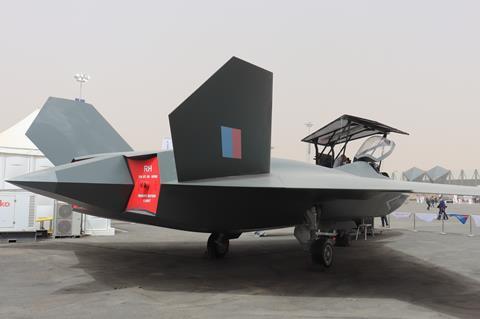 For these players and other major players – including Airbus Defense & Space, Leonardo and Raytheon – participation in the launch show was essential to illustrate their willingness to embrace the broader Vision 2030 process.

For EDGE, the defense champion of the United Arab Emirates (UAE), the event offered the opportunity to display some of its products and share its experience acquired during a similar trip previously carried out by Abu Dhabi .

Formed in 2019 through a merger of several industries, the UAE company is well established in areas such as design, development, production and in-service support.

“We started to position ourselves like any major international defense company,” Miles Chambers, EDGE’s director of international affairs, told FlightGlobal at the show. “Localization in Saudi Arabia is absolutely something we are committed to.”

Previous such initiatives included a February 2021 association agreement between EDGE subsidiary NIMR and Saudi Arabian Military Industries, related to future production of military vehicles in Saudi Arabia. The parent company is now pursuing “other opportunities in the kingdom”, he says.

“The UAE and EDGE are in a good position to do that, because for many years that’s exactly what the UAE did,” Chambers notes. “We really understand a lot of lessons learned in terms of what works and what doesn’t in terms of building an industry.

“It gives us a slightly different insight,” he says. “We understand the challenges and we can bring that experience to market.” 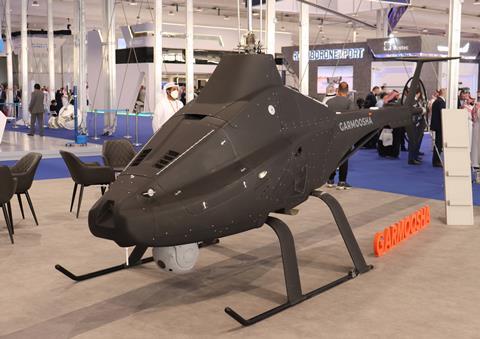 Among EDGE’s aerospace products on display at the show were the Garmoosha vertical take-off and landing unmanned aerial vehicle, QX-2 and QX-3 loitering munitions and a range of precision-guided air-launched weapons.

“EDGE’s presence in the kingdom will only grow,” he said. “This growth will take many forms, including investment in the local defense industry.”

Chambers also outlines the national benefits of continued industrial development such as that achieved by Abu Dhabi and now sought through Riyadh’s Vision 2030 campaign.

“EDGE today offers a platform for young Emirati talent to work in a fast-paced high-tech environment. Many of our businesses have been in the making for 15 or 20 years, and today we have excellent teams of “Emirati-led engineers. This is proof that this process really works and generates talent,” he said.

“If you think about what the UAE has established as an industry in just 30 years – to a point where we have businesses today where we have established joint ventures in other countries and established local manufacturing We have gone beyond the UAE as the recipient of technology transfer, for the UAE to be the one transferring the technology.

“We are a UAE-based company, but we are truly and truly a global company,” he says. 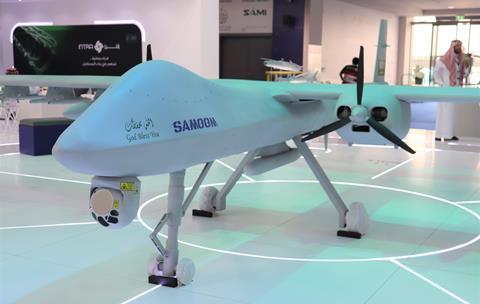 Presented in the form of a half-scale model dominating the company’s stand, the twin-engine Samoom is 11 m long and has a wingspan of 24 m. Operational endurance will be in the range of 20 to 50 hours, with the drone able to fly up to 25,000 feet.

The Samoom will carry a new 20-inch electro-optical/infrared sensor which will be jointly developed by Intra and Hensoldt. It could also be armed with 1,050 kg (2,310 lb) of air-launched weapons mounted on underwing hardpoints.

Additional tasks of an operational system could include border monitoring and pipeline monitoring, Intra says.

The new design joins a product line that already includes the Asef vertical take-off and landing series and the tactical Haboob. Developed from the Turkish-designed Vestel Karayel and optimized for the Saudi Armed Forces, the Haboob has flown more than 23,000 hours, says Anthony Gudgeon, director of airborne systems at Intra.

Manufacturing work on a Samoom prototype has yet to begin, with Gudgeon saying development work could be completed in about three years.

While partnerships are key for Saudi Arabia, there was no “corral” of US military aircraft on display, with Riyadh’s own defense equipment taking pride of place.

Despite Moscow’s invasion of Ukraine, Riyadh took a neutral stance and allowed exhibitors from Russia and Belarus to participate as planned, although their exhibits – such as that of the arms agency Rosoboronexport – were shunned by most visitors.

Meanwhile, a trio of Ukrainians promoting the products of the export agency Ukroboronprom – including two contract workers from the export company Progress – have received a significant number of offers to supply the Kyiv government with defense equipment donated or at cost.

“We are normally an exporter and would be here hoping to secure new export contracts,” says contracts manager Oleksandr Nikonishyn. “But this week we are mainly discussing imports.”

As well as reporting a strong turnout for the launch event, organizers of the show said it closed after securing deals worth SR29.7 billion (7.9 billion of dollars).

The biennial World Defense Show is set to return for its second edition from March 3-6, 2024.