They say it’s never good to judge a book by its cover, but can you judge a perfume by its bottle? Should you? The original Yves Saint Laurent Rive Gauche, in its blue, black and silver atomizer, to me smells nothing like the perfume that’s inside, while its 1970s sister fragrance, Opium, smells exactly like it does. the air. CK One, with its screw-on cap and “hip-flask” shape, smells as clean and youthful as you’d expect. But Thierry Mugler’s Angel, with that iconic blue star shape, couldn’t be less representative for me of the warm, chocolaty scent of vanilla.

It’s hard not to be swayed by a nice bottle, or put off by an ugly one. But for perfume houses that want to attract customers both in-store and online (despite a surge during the pandemic, perfume sales still represent less than 5% of beauty sales online), create a bottle too desirable that the fragrance inside it has again become important. The bottles have color, texture and even printing. The collaborations go beyond the usual holiday season limited editions, as artists, architects and master glassmakers are called upon to reinvent form.

“It’s part of the meaning”, explains Christine Nagel, in-house perfumer at Hermès, about the design of a bottle. “For me, with perfume, there is always meaning.” The alignment of the two elements is imperative; when they don’t, “it’s horrible,” she says. “It’s like your great aunt knitting an awful outfit for your adorable little baby, and you have to dress her up so everyone is happy.”

Historically, the relationship between perfume and bottle has had its ups and downs. At the turn of the last century, when the twin revolutions of manufacturing and marketing meant that a new bottle could be designed for each new creation, a perfume bottle was less a work of art, more a curiosity, a gimmick. Examples included lucky horseshoes (for Cherigan’s Chance) and an Eiffel Tower (Soir de Paris by Bourjois).

At Louis Vuitton, Frank Gehry collaborated with a master glassmaker from Murano

Then, in 2000, Frédéric Malle changed the game with his “anti-marketing” approach: by keeping his chic glass bottles and distinctive black and red labels unchanged, the focus became only on what there was inside. It has been replicated by many perfume houses for their high-end lines – and that means that at the more sophisticated end of the perfume world, the simplest of glass bottles has been the de facto signifier of good taste. .

One of the reasons for the current focus on form is durability. The joy of refilling – and having a perfectly formed little work of art on your table – returns. It’s this spirit that perfumer Lyn Harris wanted for the exquisite refillable glass bottles (from £350) she commissioned from glassmaker Michael Ruh for her Perfumer H fragrance line. Each is hand blown and shaped. hand, and takes between two and three days to make, with two other people involved in finishing and engraving, and “multiple interventions”. Echoing the in-store workshops of Parfumeur H, the heavy colored glass bottles have, Ruh says, “the feel of a laboratory; something slightly alchemical” (he particularly likes those in dark gray and moss green).

The 10 bottles of perfume from designer Dries Van Noten’s new beauty line are also refillable (from £195). Much like his fashion, Van Noten’s wish was to “celebrate craftsmanship and industrial innovation”, and in doing so he set a new blueprint for design. Each fragrance is centered on two olfactory ideas, and the bottles reflect this contrast: Cannabis Patchouli is made half from bio-based wood and half from forest green glass. Soie Malaquais combines Delft blue porcelain with dark burgundy glass. What is refreshing and exciting is seeing different colors and materials used for perfumery.

Also pushing the boundaries, Guerlain collaborated with the Yves Klein Archives to create a 110th anniversary edition of its L’Heure Bleue fragrance (€15,000). Its iconic “inverted heart” Baccarat crystal bottle was recreated by Waltersperger glassware, hand-painted in International Klein Blue, a coloring and pigmentation process patented by the artist. Each of the 30 pieces, containing 1.5 liters of perfume extract, comes with a signed and numbered certificate of authenticity – like a work of art.

Amplifying the art of the bottle, American artist James Turrell has created two limited-edition bottles (there are 100 of each, starting at €25,000) in association with Lalique. Turrell brought his vision to both the fragrance and the bottles: Range Rider (for men) and Purple Sage (for women) evoke the scents of the Colorado plateau, and the purple, sapphire blue and clear crystal bottles are inspired by asian stupa shapes. . “Their architectural structure, like that of the pyramids, makes them monuments of high spiritual value in which light plays an essential role,” explains Turrell, who has long been fascinated by the play of light on surfaces. “I was inspired by it for the design of the bottles, which had to contain the light while letting its slight coloring show through.”

At Louis Vuitton, architect Frank Gehry, winner of the Pritzker Prize, plays with color and light in collaboration with Simone Cenedese, master glassmaker from Murano. The once aluminum flowers that seem to spring from the bottle are now clusters of blue, red, green and gold colored glass. The bottles will be a limited edition of 40 (€5,000), signed and numbered by Gehry; in addition, there will be “masterpieces” on order (€50,000). 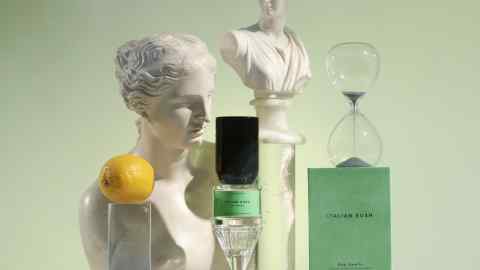 More color can be found at Gucci: the brand’s Alchemist’s Garden fragrances (£255), which come in lacquered or clear glass bottles of green, blue, pink, red, white and black, are adorned with flowers or decorative golden foliage. And Dior also turned to Murano for its collaboration with French architect India Mahdavi to reinvent the famous J’Adore bottle in a swirl of glass and hand-painted gold thread. Only a thousand bottles will go into production (£1,200).

For some houses, reinventing means going back to the archives. The stirrup-shaped bottle of the Galop d’Hermès perfume (£196) is an almost exact replica of the one offered at the opening of the first Hermès boutique in New York in 1930 and rediscovered in a museum many years later. It has 13 different parts, each of which is polished by hand. A limited number are available at outlets including Harrods and Selfridges.

Is wearing a perfume dispensed from such a rarefied medium somewhat different? Impossible to say, but does it remind you that perfumes – at least the great ones – deserve to be thought of as works of art? With that, I would say absolutely, resounding, fragrant yes.